A nurse at the Veterans Affairs Medical Center in New York City holds a cellphone so that a COVID-19 patient can see and listen to his family on April 24. Robert Nickelsberg/Getty Images hide caption 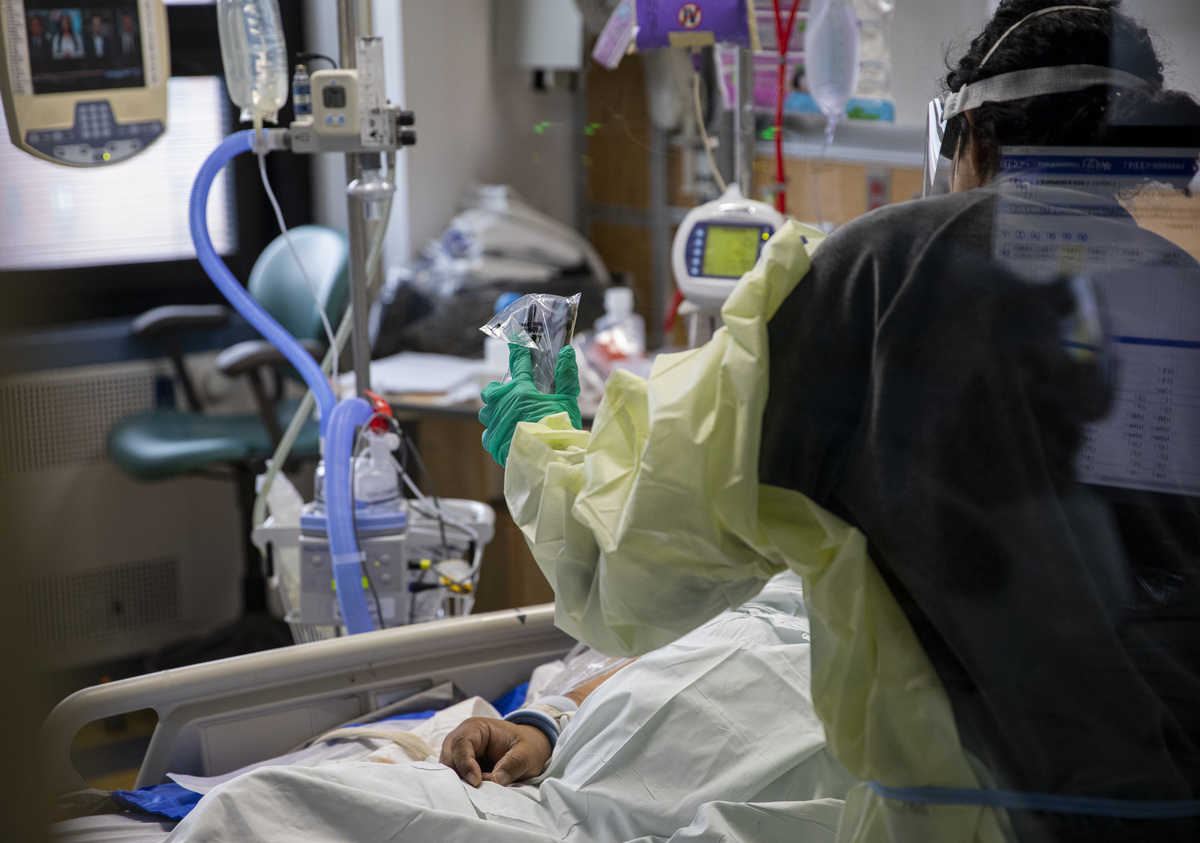 A nurse at the Veterans Affairs Medical Center in New York City holds a cellphone so that a COVID-19 patient can see and listen to his family on April 24.

COVID-19 has given ventilators an undeservedly bad reputation, says Dr. Colin Cooke, an associate professor of medicine in the division of pulmonary and critical care at the University of Michigan.

“It’s always disheartening to know that some people are out there saying if you end up on a ventilator it’s a death sentence, which is not what we are experiencing — and I don’t think it’s what the data are showing,” Cooke says.

Early reports from China, the U.K., and Seattle found mortality rates as high as 90 percent among patients on ventilators. And more recently, a study of some New York hospitals seemed to show a mortality rate of 88 percent.

But Cooke, and others, say the New York figure was misleading because the analysis included only patients who had either died or been discharged. “So folks who were actually in the midst of fighting their illness were not being included in the statistic of patients who were still alive,” he says.

Those patients made up more than half of all the people in the study.

And Cooke suspects that many of them will survive.

“We think that mortality for folks that end up on the ventilator with COVID is going to end up being somewhere between probably 25% up to maybe 50%,” Cooke says.

Scary, but hardly a death sentence.

Montefiore Health System in the Bronx serves a population with low incomes and high rates of diabetes, obesity and other health problems. And in April, it faced an onslaught of very sick people with COVID-19.

“The number of patients with critical care needs was more than triple the normal levels,” says Dr. Michelle Ng Gong, chief of critical care medicine at Montefiore and a professor at Albert Einstein College of Medicine.

Weeks later, it’s still too soon to calculate mortality rates precisely, Gong says. “We still have a large number of patients on mechanical ventilation in our intensive care unit,” she says. “So the outcomes of those patients is still uncertain.”

But Gong added that when it comes to COVID patients on ventilators, “We win more than we lose.”

That’s especially good news coming from a city where hospitals faced so many challenges, says Dr. Todd Rice, who directs the medical intensive care unit at Vanderbilt Hospital in Nashville.

“They were having to care for patients in makeshift ICUs, [with] doctors who weren’t their normal ICU doctors,” Rice says. “That probably results in some worse outcomes.”

So far, Vanderbilt has been able to keep COVID patients on ventilators in existing ICUs with experienced intensive care teams, Rice says. And the mortality rate “is in the mid to high 20% range,” he says.

That’s only a bit higher than the death rate for patients placed on ventilators with severe lung infections unrelated to coronavirus.

And, like many other intensive care specialists, Rice thinks COVID-19 will turn out to be less deadly than the early numbers suggested.

“I think overall these mortality rates are going to be higher than we’re used to seeing, but not dramatically higher,” he says.

Preliminary data from Emory University in Atlanta support that prediction.

The mortality rate among 165 COVID patients placed on a ventilator at Emory was just under 30%. And unlike the New York study, only a few patients were still on a ventilator when the data were collected.

Factors that may have kept death rates low include careful planning and no shortages of equipment or personnel, says Dr. Craig Coopersmith, who directs the critical care center at Emory. But the care largely followed existing protocols for patients with life-threatening lung infections, he says.

“There is no secret magic that can’t be replicated in other places,” Coopersmith says. “And I do believe that we will see a global trend toward better outcomes on the ventilator and in the intensive care unit.”

Also, intensive care doctors say ICU teams are becoming more skilled at treating COVID-19 patients as they gain more experience with the disease. For example, they are doing more to prevent dangerous blood clots from forming.

That means COVID-19 mortality rates in ICUs are likely to decrease over time, Coopersmith says.