Casa de Salud clinicians, staff and health apprentices socially distance outside their New Mexico clinic. The facility is one of many social safety net clinics that haven’t yet received pandemic-related funding and are now on the brink financially. Elizabeth Boyce/Casa de Salud hide caption 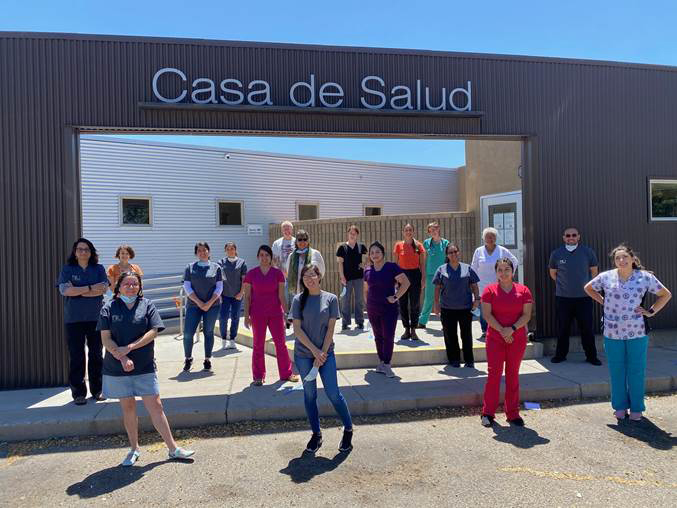 Casa de Salud clinicians, staff and health apprentices socially distance outside their New Mexico clinic. The facility is one of many social safety net clinics that haven’t yet received pandemic-related funding and are now on the brink financially.

And as with so many other health care institutions that serve as a safety net, this clinic’s revenue — and its future — are threatened by the COVID-19 pandemic.

“I’ve been working for the past six weeks to figure out how to keep the doors open,” says the clinic’s executive director, Dr. Anjali Taneja. “We’ve seen probably an 80% drop in patient care, which has completely impacted our bottom line.”

In March, Congress authorized $100 billion for health care providers to compensate them both for the extra costs associated with caring for COVID-19 patients and for the revenue that’s not coming in because of interruptions in the usual sorts of care they provide. Clinics, hospitals, doctors’ practices and others have been required to stop offering most nonemergency services, and many patients are afraid to visit health care facilities.

But more than half that money has been allocated by the Department of Health and Human Services, and the majority of it so far has gone to hospitals, doctors and other facilities that serve Medicare patients.

Officials said at the time that this was an efficient way to get the money beginning to move to large numbers of providers. That approach, however, has left out a large swath of the health system infrastructure that serves the low-income Medicaid population and children. Casa de Salud, for example, accepts Medicaid but not Medicare.

State Medicaid directors say that without immediate funding, many of the health facilities that serve Medicaid patients could close permanently. More than a month ago, bipartisan Medicaid chiefs wrote to the federal government asking for immediate authority to make “retainer” payments — not related to specific care for patients — to keep their health providers in business.

“If we wait, core components of the Medicaid delivery system could fail during, or soon after, this pandemic,” wrote the National Association of Medicaid Directors.

So far, the Trump administration has not responded, although in early April it said it was “working rapidly on additional targeted distributions” for other providers, including the clinics, physicians and other staff that predominately serve Medicaid patients.

In an email, the Centers for Medicare & Medicaid Services said officials there will “continue to work with states as they seek to ensure continued access to care for Medicaid beneficiaries through and beyond the public health emergency.”

The delay is frustrating Medicaid advocates.

“This needs to be addressed urgently,” says Joan Alker, executive director of Georgetown University’s Center for Children and Families in Washington, D.C. “We are concerned about the infrastructure and how quickly it could evaporate.”

In the administration’s explanation of how it is distributing the relief funds, Medicaid providers are included in a catchall category at the very bottom of the list, under the heading “additional allocations.”

“To not see anything substantive coming from the federal level just adds insult to injury,” says Todd Goodwin.

He runs John F. Murphy Homes in Auburn, Maine, which provides residential and day services to hundreds of children and adults with developmental and intellectual disabilities. He says his organization — which has already furloughed almost 300 workers and spent more than $200,000 on expenses related to COVID-19, including essential supplies such as masks and protective equipment that will not be reimbursable — has not been eligible for any of the various aid programs passed by Congress.

Goodwin’s organization gets most of its funding from Medicaid and public school systems. It has tapped a line of credit to stay afloat, he says, “but if we’re not here providing these services, there’s no Plan B.”

Even providers that largely serve privately insured patients are facing financial distress. Dr. Sandy Chung is CEO of Trusted Doctors, which has about 50 physicians in 13 offices in the Northern Virginia suburbs around Washington, D.C. She says about 15% of the group’s funding comes from Medicaid, but the drop in private and Medicaid patients has left Trusted Doctors “really struggling.”

“We’ve had to furlough staff, had to curtail hours, and we may have to close some locations,” Chung says.

Of special concern are children — because Medicaid covers nearly 40% of them across the United States. Chung, who also heads the Virginia chapter of the American Academy of Pediatrics, says that vaccination rates are off 30% for infants and 75% for adolescents, putting them and others at risk for preventable illnesses.

The biggest rub, she adds, is that with the economy in free fall, more people will qualify for Medicaid coverage in the coming weeks and months.

“But if you don’t have providers around anymore, then you will have a significant mismatch,” she says.

Back in Albuquerque, Taneja is working to find whatever sources of funding she can to keep the clinic open. She secured a federal loan to help cover her payroll for a couple of months but worries what will happen after that.

“It would kill me if we’ve survived 15 years in this health care system, just to not make it through COVID,” Taneja says.

Kaiser Health News senior correspondent Phil Galewitz contributed to this story. KHN is a nonprofit, editorially independent program of the Kaiser Family Foundation and is not affiliated with Kaiser Permanente.