An engineer works in April on an experimental COVID-19 vaccine at Sinovac Biotech’s facilities in Beijing. Sinovac Biotech is conducting one of four clinical trials that have been authorized in China. Nicolas Asfouri/AFP via Getty Images hide caption 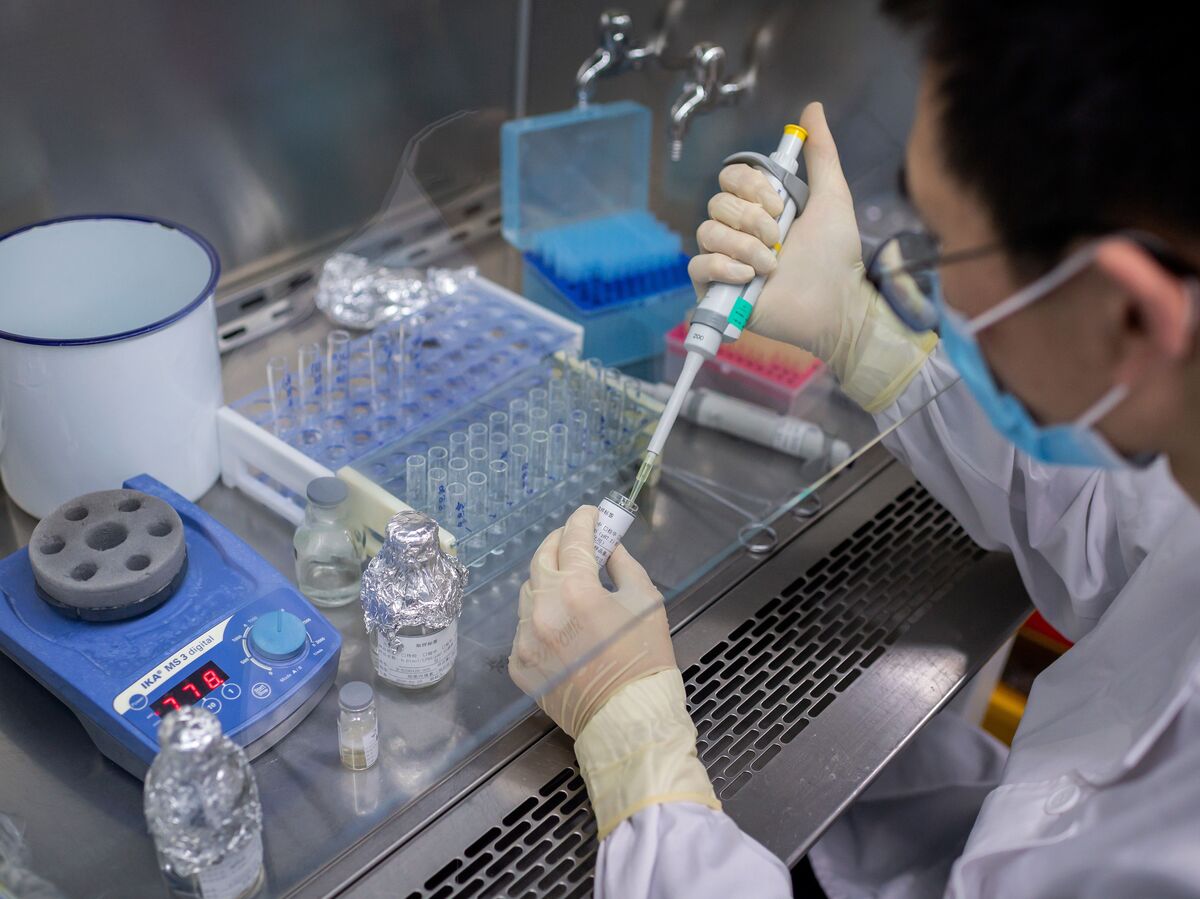 An engineer works in April on an experimental COVID-19 vaccine at Sinovac Biotech’s facilities in Beijing. Sinovac Biotech is conducting one of four clinical trials that have been authorized in China.

The race for a coronavirus vaccine is on.

This week, Massachusetts-based Moderna Inc. reported promising preliminary results for the vaccine it is developing. It’s one of eight vaccines under development that have been approved for clinical trials, according to the World Health Organization.

Half of those vaccines are being developed in China, where the outbreak first emerged.

The Chinese government has fast-tracked promising projects and has poured money and resources into the effort to find a vaccine. Experts say the ruling Communist Party recognizes that there’s much more at stake than public health.

One of the biggest concerns is the economy, says Yanzhong Huang, a senior fellow for global health at the Council on Foreign Relations.

“There’s a strong incentive to reopen the economy, right, to have business back to normal,” he says.

The party’s legitimacy has long depended on a strong economy. Before the pandemic, the government was targeting 6% growth in the gross domestic product this year. In the first quarter, the economy shrank by nearly 7%.

“The vaccines would be, indeed, a silver bullet,” says Huang.

A homegrown inoculation would serve another purpose for the government, observers say: deflecting heat. Beijing has been beset by criticism for its early handling of the outbreak and has faced a growing chorus of calls from other governments for an investigation into the origins of the disease, which first emerged in the Chinese city of Wuhan.

Chinese President Xi Jinping told the WHO’s annual meeting on Monday that China had acted with “openness, transparency and responsibility” and said China supported the idea of a “comprehensive review” of the global response.

Zuoyue Wang, a professor of history at California State Polytechnic University, Pomona, says a Chinese-made vaccine could help undercut some of the criticism.

And if China won the race to develop the first COVID-19 vaccine, the propaganda value would be huge. Officials in Beijing have disparaged Western responses to the disease and have tried to make the case that China’s authoritarian political system is superior — especially in the face of a crisis like this one.

Xi on Monday pledged to share any vaccine with the rest of the world. William Lee, chief economist at the Milken Institute, which is tracking global vaccine projects, says Beijing is targeting developing countries and territories linked to the Belt and Road Initiative, China’s signature global infrastructure drive.

“A success story with a COVID vaccine would be such a marvelous cherry to put on that picture,” Lee says. “They’re incentivized to develop the vaccine as quickly as possible and distribute it as widely as they can among their Belt and Road countries in order to gain and expand China’s dominance within that sphere. And also almost as a way of saying, ‘The Western economic models have failed to develop it as quickly as we have.’ “

Before the pandemic, China was already investing heavily in areas like pharmaceuticals and biotechnology, in pursuit of ambitious plans to become a world leader across a range of sectors.

According to government statistics, research and development spending in science and technology last year was more than $300 billion, about 24 times what it was two decades ago.

In the hunt for a COVID-19 vaccine, the Ministry of Science and Technology is funding many of the trials.

China has become the world’s second-biggest pharmaceutical market, but breakneck growth has led to quality-related scandals.

In the latest, in 2018, the Changchun Changsheng Life Sciences drug company was found to have faked production records for a rabies vaccine and sold more than 250,000 doses of a vaccine for infants that didn’t meet medical standards.

The case infuriated consumers, and a poll at the time showed that domestic confidence in Chinese vaccines slumped.

Among China’s COVID-19 vaccine efforts, one of the furthest along is a collaboration between a military medical institute and a private biotech company, CanSino Biologics.

The virologist running the program is Chen Wei, a People’s Liberation Army general. She has become something of a national hero because of her efforts. She said on state TV in April that developing a vaccine relates to national security.

“In some areas and on some issues, we must have scientific self-confidence. With more than a billion people, we can’t rely on others. We must rely on our own scientific strength to protect our people,” she said.

Going it alone can carry risks, though, says Lawrence Gostin, an expert on public health law at Georgetown University who advises the WHO.

“Instead of having a complete, coordinated international response the way scientists want,” he says, “this is almost becoming a race to the moon.”

In the long run, winning the race may not amount to much, at least from a commercial standpoint.

“The irony is being the first is actually a bit of a curse,” says Peter Hotez, co-director of the Texas Children’s Hospital Center for Vaccine Development, which is working on a COVID-19 vaccine of its own.

“If you look at the major vaccines used in the U.S., the ones that are in use generally were not the first out on the market,” he says. “They got replaced over time.”