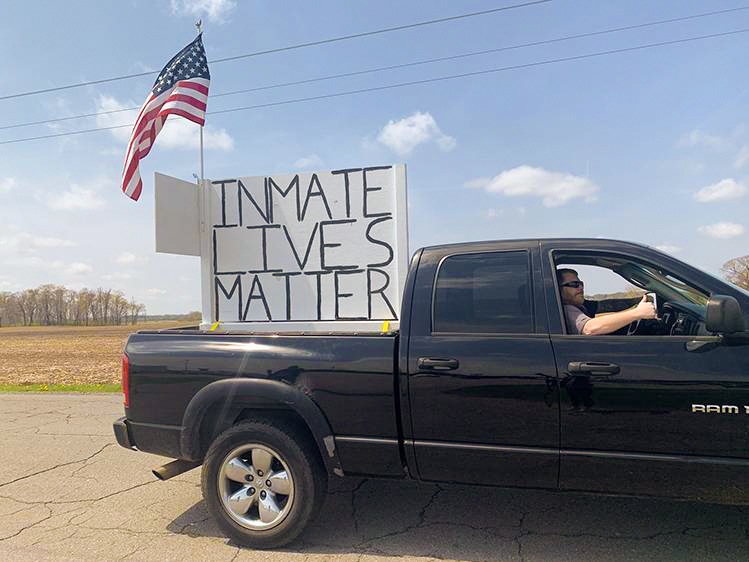 On Tuesday, April 28 demonstrators outside Westville Correctional Facility protested conditions in the facility.

Scottie Edwards died of COVID-19 just weeks before he would have gotten out of the Westville Correctional Facility in Indiana.

Edwards, 73, began showing symptoms of the disease in early April, according to the accounts of three inmates who lived with him in a dormitory. He was short of breath, had chest pain, and could barely talk. He was also dizzy, sweaty and throwing up.

Edwards was serving a 40-year sentence for attempting to kill someone in 2001. He would have been released to home detention on May 1, but died on April 13. The next day the Indiana Department of Correction sent out a statement that indicated Edwards’ symptoms came on suddenly: “The offender, a male over the age of 70, who did not have indications of illness, reported experiencing chest pains and trouble breathing on Monday.”

Edwards’ fellow inmates dispute the statement and say he had been seeking medical attention at the prison for days before he died.

Since the start of the pandemic, prisoners and their families have contradicted state officials about the conditions inside Indiana prisons. Many inmates report they’ve had no way to protect themselves from close contact with other inmates and staff members. They believe contracting the disease is inevitable. Indeed, 85% percent of the prisoners tested at Westville have been positive for the virus. Many of them were housed in the same dorm as Edwards.

As of May 22, at least 18 Indiana prisoners have died from confirmed or presumed coronavirus infections, and 650 inmates have tested positive for the virus. And while the state has maintained that it isolates men and women with symptoms, inmates say even severely ill prisoners have been left in their dorms until it is too late. Their accounts call into question efforts to contain the virus, along with the care inmates receive once they have it.

“[Edwards] had been sick for approximately about a week and a half,” says one inmate named Josh. Josh allowed a family member to record a call about Edwards, and he asked to be identified by his first name only, because he fears retaliation from prison staff.

His fellow prisoners say Edwards couldn’t even make it to see medical staff on his own — they pushed him in a wheelchair. Each time, he was sent back to his quarters.

“Those bastards said I’m fine, I just need to drink water and rest,” Josh recounted Edwards saying. “I’m clearly not fine — I can’t breathe.” Another prisoner wrote in an electronic message to a reporter that Edwards’ room “smelled like sickness and death.”

On the day he died, Josh says Edwards looked pale before he stumbled on his way to the bathroom. A pair of fellow inmates caught him and helped him sit down. “He sounded like he was winded, like he had just ran a marathon,” Josh wrote via the prison system’s electronic communications software. “He was just saying ‘I can’t breathe, I can’t breathe.'” He says an officer called the prison medical staff, who tended to Edwards in the bathroom for about 45 minutes.

“They finally took him out on oxygen,” Josh says. “Next thing we know, five hours later, he died.”

The Westville inmates emphasize that Edwards didn’t wait until that Monday to report his symptoms — he had complained to staff for days. “There is a major problem here with this place and it’s outta control,” wrote Josh.

Dr. Kristen Dauss, chief medical officer for the Indiana Department of Correction, declined to explain the different accounts of his death. “We do not talk about specific cases and patient clinical status,” she says.

Across the nation, at least 415 prisoners had died of the infection as of the week of May 20, and more than 29,000 had tested positive, according to the Marshall Project.

The American Civil Liberties Union and other advocacy groups have called for the early release of some prisoners, especially the old and sick. Protesters have demonstrated outside Westville and other Indiana prisons to call attention to the conditions inside. Governors in the nearby states of Ohio and Kentucky have ordered some prisoners released, but Indiana Gov. Eric Holcomb has refused. He says it’s up to local judges to decide, on a case-by-case basis.

In the meantime, Dauss says Indiana prisons are taking steps to control the spread of the coronavirus. “We move quickly and, in fact, immediately to separate those who are sick from those who are not sick,” says Dauss.

But according to accounts from numerous inmates, that kind of quick isolation of sick prisoners hasn’t always happened, at least through much of April.

Three different prisoners described another COVID-19 death in a different Indiana prison, the Plainfield Correctional Facility, on April 19. Lonnell Chaney, they said, had been asking for medical help for days.

“He didn’t even know where he was,” one inmate wrote to a reporter. Medical staff had checked on Chaney, who mumbled in response, but left him in the quarters. A prisoner tried to convince officers that the man’s condition was serious — Chaney couldn’t catch his breath — but the officers brushed it off.

The prisoners say Chaney, who was 61, died in his bed in the crowded dorm. “You must be almost dead to get outside help,” wrote the Plainfield inmate.

Six Plainfield prisoners have died during the coronavirus pandemic. The Department of Correction has not released a statement about any of those men. Of 145 Plainfield prisoners tested for the virus, 119 were positive. Forty five staffers tested positive, as well. Indiana reports two deaths of prison staffers, as of May 22.

At the Westville prison, Josh says another man in his dorm complained about similar symptoms, and correctional officers wrote the man up for being disruptive.

“Everybody here is terrified,” Josh says.

As the virus spreads, prisoners’ families are told very little. They say prisons refuse to disclose basic information that would put them at ease, including whether an inmate is alive. In Scottie Edwards’ case and others, families didn’t know their loved ones were sick until after they had died—even though a department policy calls for notification when “death may be imminent.”

Crystal Gillispie talked to her father, Lonnell Chaney, for the last time on April 13. Their call lasted five minutes, but felt shorter. He told her to send pictures of his grandkids. And even though the coronavirus had started to spread in his dorm at the Plainfield Correctional Facility, he was more concerned about his family.

“He was like, ‘Just make sure you’re wearing your gloves and masks,'” Gillispie remembers. “I was like, ‘Okay, Daddy. You do the same.’ He was so worried about us, and he ended up catching it.”

Lonnell Chaney, an inmate at the Plainfield Correctional Facility made pleas with correctional officers to be taken to the medical unit when he contracted COVID-19. He later passed in his dorm from the disease, only having received a check up from medical personnel. Brenda Chaney hide caption

The next time she heard news of her father, it was from her aunt, his sister: the prison had called her to say Chaney was dead.

Edwards’ sister, Gloria Sam, says her brother was new to Westville prison, because he’d recently requested transfer to a facility with a law library. He ended up at Westville just before the pandemic started.

“He said ‘I am afraid of this virus because we’re here close together and if it comes out it’ll spread like wildfire,'” she says. Sam hadn’t heard from Edwards in more than a week when her phone rang on April 14. She remembers that even though her caller ID said it was from the State of Indiana, it didn’t occur to her that it was about her brother.

“They said, ‘Well, we have some bad news.’ I thought they were gonna say he was sick,” she says. They told her he had died.

If possible, Sam says, she would have wanted to say goodbye.

“It’s one of the most hurtful things I’ve experienced in my life,” she says.

This story comes from NPR’s partnership with Side Effects Public Media, WFYI, and Kaiser Health News.