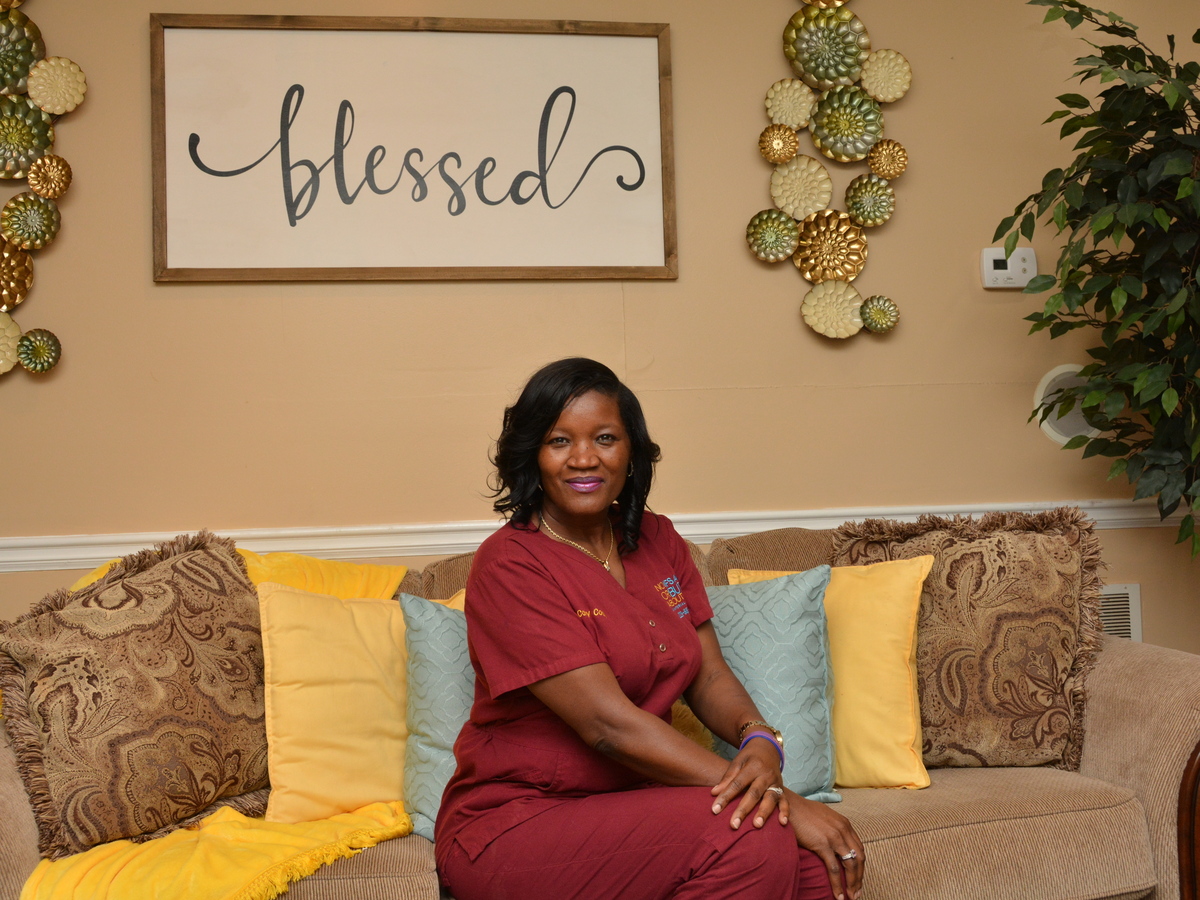 Cathy Cody is owner/operator of No Ifs Ands Or Butts About It Janitorial Services & More, LLC in Albany, Ga.

On a Tuesday morning in Albany, Ga., Cathy Cody is walking through the empty hallways of a home left vacant by COVID-19.

“Right now, I’m standing in a home we started on, packing up their loved one’s belongings because that’s all they have left,” Cody says during a Facebook Live video.

She’s stacked U-Haul boxes on the carpeting, filled with shoes, clothes, perfume bottles and purses — every last item she’ll haul into storage. It’s a somber glimpse into the final days before the virus took a person’s life.

“You can see how the person was trying to, I guess, maintain,” Cody says in an interview with NPR. “But they succumbed to the coronavirus.”

Boxing these possessions is part of her job now.

Cody runs a cleaning business in Albany called No Ifs Ands Or Butts About It Janitorial Services & More, LLC, and since the pandemic began, a handful of clients have called on her after losing family members to COVID-19. Cody found a way to help, and she calls the service Boxed With Love. She hopes she can help take a little weight off families suffering through this devastating pandemic.

She suits up in white Tyvek coveralls, goggles, gloves and a face mask. As she enters the homes, she and her team use a fogger machine to spray a mist of disinfectant before beginning the deep clean.

“The families we have been assisting are people I know,” Cody says. “People that we went to church with, people that we’ve hugged and told we love. It’s heartbreaking.”

Albany is the biggest city in Dougherty County, a three hour drive south from Atlanta. The close-knit, predominantly African American community of almost 90,000 has seen one of the nation’s highest rates of COVID-19. According to the Georgia Department of Public Health, over 1,730 of the county’s residents have tested positive for the coronavirus and at least 140 people have died.

State health officials point to a pair of funerals in Albany held in late February and early March that sparked the outbreak. Michael Fowler of the Dougherty County Coroner’s Office told Time magazine, “It just went like wildfire. It was just like a bomb went off here.”

The unimaginable and sudden loss caused by this virus is an eerily familiar pain for Cody, whose son was murdered on June 11, 2017. Anthony Wright, 21, was shot and killed outside an apartment complex when he tried to stop an attack on his older sister.

Cody remembers standing outside his closet.

“The only thing I had left was his clothing, his shoes, his cap and gown. He had this Levi’s jacket, it was green, and his scent was still in the coat,” she says. “We buried him on his 22nd birthday.”

In the days and weeks following his death, she says rummaging through her son’s closet was the hardest part.

“I remember grabbing hold to his clothing and I remember just screaming and crying to the top of my lungs, ‘God, if you don’t help me, I don’t know what to do.’ And I remember waking up the next day, in the living room, on the floor, on the pile of clothes that I had pulled out of the closet,” she says. “Because that was it. That’s all I had.”

The sharp memory of trauma drives her mission behind Boxed With Love, a service she dedicates to her son.

“She eased a lot of the burden off me,” says Teri Franklin of Albany. “She’s a godsend, honestly.”

Franklin lost both of her parents to COVID-19. Her mother died on March 25, and then, just over three weeks later, her father died on April 18.

“I was very close with my mom and dad, we talked every day,” Franklin says. “I would’ve never thought that I would be burying my parents two weeks in-between each other. Married for 46 years.”

Marjorie Franklin, a retired seamstress, was 66. Nathaniel Franklin, who celebrated his retirement last June, was 65. Both of her parents died in hospitals. Teri Franklin says the moment she returned to her parents’ house, she was surrounded by their memories.

“You can really see it in these houses. The pictures, the people, their beautiful families,” Cody says. “I got to see how [Marjorie] was a family woman. And she loved God and she was a dresser, she loved clothes.”

“Ms. Cathy had packed up belts, hats, scarves,” Franklin says of her parents’ belongings. “She took everything out of the drawers, which were my dad’s ties; my mom’s sewing room and sewing machines; my mom still had shoes that had never been out of the box. [Cathy] packed everything up and put it in storage.”

Albany is one of many communities across the U.S. pushed to the edge by the coronavirus outbreak. As the state of Georgia continues to reopen, there’s lingering uncertainty in Dougherty County about more lives at risk, and whether COVID-19 could make a comeback.

“Even in pandemics,” she says, “There is hope, there is help, and my God, there sure is God.”