President Trump and China’s President Xi Jinping, shown here in 2019, have both faced criticism for their handling of the coronavirus. Both leaders are now pushing hard for a vaccine. The U.S. has already agreed to pay a drug company more than $1 billion to produce a vaccine that’s yet to be approved. Xi says if China succeeds in developing a vaccine, it will be declared “a global public good.” Kevin Lamarque/Reuters hide caption 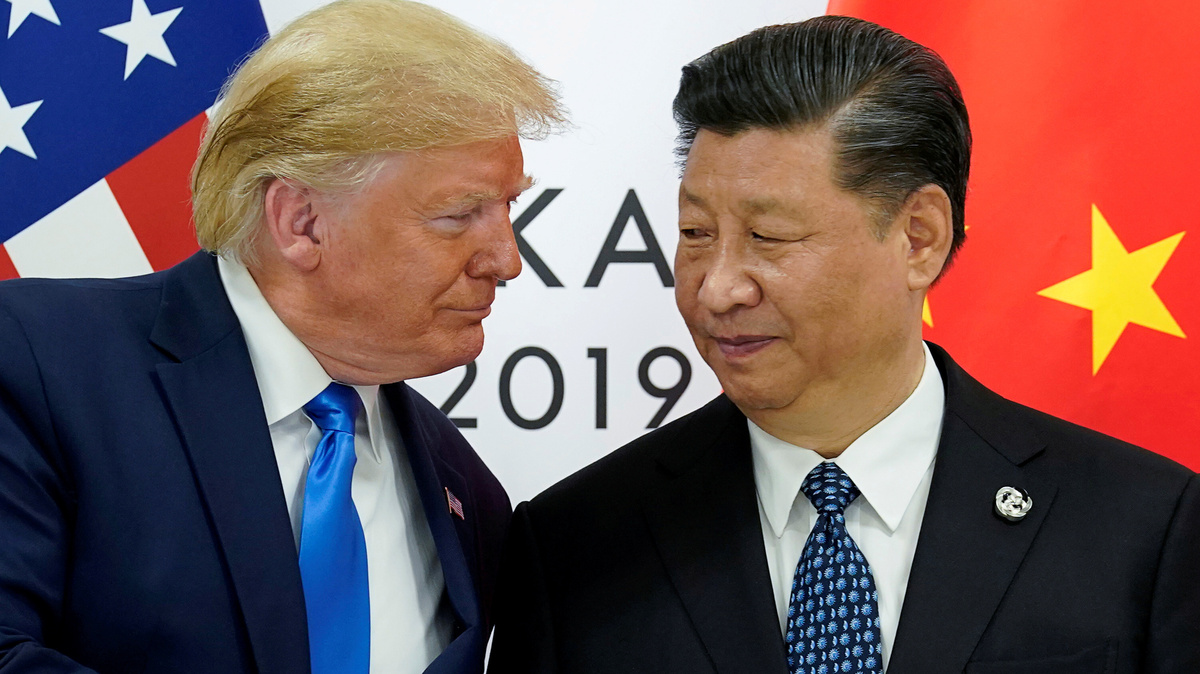 President Trump and China’s President Xi Jinping, shown here in 2019, have both faced criticism for their handling of the coronavirus. Both leaders are now pushing hard for a vaccine. The U.S. has already agreed to pay a drug company more than $1 billion to produce a vaccine that’s yet to be approved. Xi says if China succeeds in developing a vaccine, it will be declared “a global public good.”

The race to defeat the coronavirus can be viewed in two very distinct ways. One is based on international cooperation, with a vaccine treated as a “global public good.” The other is competitive, a battle between nations that’s being described as “vaccine nationalism.”

Many are hoping for the former, but are seeing signs of the latter.

The main competition, on this and many other global issues, appears to be between the U.S. and China. Both President Trump and China’s President Xi Jinping have faced criticism for their handling of the coronavirus outbreak. Success with a vaccine at home could make up for the earlier shortcomings.

“We’re about to have an unprecedented battle over access to the vaccines, which will be far more challenging if we’re in a U.S.-versus-China Cold War environment,” said Ian Bremmer, president of the Eurasia Group, a political consulting firm.

Trump’s Operation Warp Speed is designed to develop a COVID-19 vaccine for Americans as soon as possible, and with an eye on the November presidential election.

Last week, the U.S. government announced it was paying up to $1.2 billion to the drugmaker AstraZeneca to start work on a vaccine that could be ready as early as October, though there’s not yet a vaccine that’s been proven to be safe and effective.

Meanwhile, China’s Xi has adopted a somewhat softer public line that some are describing as “vaccine diplomacy.”

Xi says China will spend $2 billion to help developing countries. China also is among dozens of countries that have signed on to a resolution by member states of the World Health Organization that says a vaccine should be treated as a “global public good,” to be distributed as widely, fairly and cheaply.

China faced global condemnation for its early efforts to downplay the severity about the virus and has sought to rewrite the narrative by promoting its efforts to find a vaccine and assist other countries.

China is making a major push to develop a vaccine at home and has at least four trials underway.

Xi wants China to be a world leader in the most important technologies of the 21st Century, including biopharmaceuticals. If China became the first to develop a vaccine, it would consider it a huge victory.

However, some U.S. national security officials say the Chinese efforts include attempts to hack into American and other Western drug companies to steal valuable research information.

“We have the full expectation that China will do everything in their power to obtain any viable research that we are conducting here in the U.S.,” said Bill Evanina, the director of the National Counterintelligence and Security Center. “That will be in line with their capabilities and intent the last decade plus, and we are expecting them to continue to do so.”

While one country, or one company, may take the lead when it comes to a vaccine, the worldwide nature of the problem points to the need for a truly global solution, according to those in the international health community.

For example, AstraZeneca, which is getting the U.S. government funding, is a Swedish-British firm, which is hoping to produce vaccines based on promising research conducted at Oxford University in Britain. AstraZeneca, like all the major Western pharmaceutical companies, has offices and manufacturing plants spread around the globe.

Many players in many countries are likely to be involved. But it takes time to ramp up vaccine production, and this points to a crucial question: in a world of more than 7 billion people, who’s at the front of the line, and who’s at the back?

“The challenge is going to come in the first year in terms of capacity, combined with disagreements about who should be first, second and third in line,” said Nancy Kass, professor of bioethics and public health at Johns Hopkins University.

New drugs and vaccines traditionally go first to the wealthiest countries, and that’s the expectation in this case as well. But the exact order could depend on where the vaccine is first developed. The U.S. and China could have very different priorities on how to distribute a vaccine.

Pharmacist Michael Witte, left, gives Neal Browning a shot in the first-stage study of a potential coronavirus vaccine on March 16 in Seattle. Countries and companies are racing to find a vaccine, with some describing the competition as ‘vaccine nationalism.’ Ted S. Warren/AP hide caption 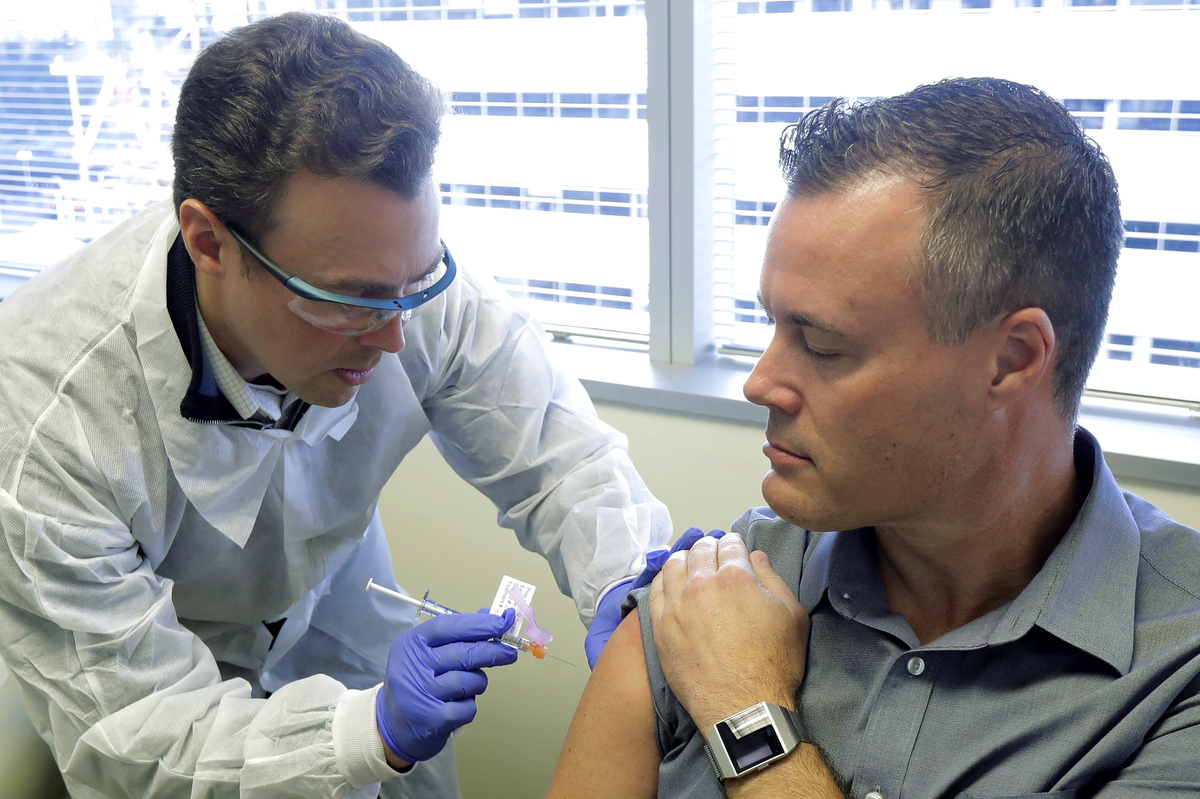 Pharmacist Michael Witte, left, gives Neal Browning a shot in the first-stage study of a potential coronavirus vaccine on March 16 in Seattle. Countries and companies are racing to find a vaccine, with some describing the competition as ‘vaccine nationalism.’

Rich countries have been hit hardest by the virus so far. But in many of these nations, COVID-19 cases are leveling off or declining, while they are rising rapidly in the developing world, including countries like India, Brazil and Peru.

Global health organizations are working on plans with a focus on poorer nations.

Kate Elder of Doctors Without Borders says her organization often faces challenges in dealing with Western pharmaceutical companies that have tremendous leverage because they are the only, or one of just a few, that make a critical drug.

“We can design things as a global community,” she said. “But ultimately, since the power is in the pharmaceutical corporation’s hands to make those decisions, it’s up to them. At what scale they produce these vaccines, at what price they set them, and who are the first customers that they’ll cater to.”

Because the demand for a new vaccine will be so great, nations, political leaders and drug companies are likely to face a range of conflicting pressures. They will be need to provide the vaccine at home, but will also face intense scrutiny to share it widely, fairly and cheaply abroad.

“It’s set up to be a massive geopolitical battle,” said Bremmer, of the Eurasia Group. “Not just around the discovery of the vaccine, but the manufacturing chain — with billions of doses needed, and the challenges of a global vaccination campaign.”